Born in 1928 in Nice, the child of two painters, Yves Klein might have seemed predestined to become an artist. In 1947, at the age of nineteen, he developed an intense interest in an unlikely combination of topics: Rosicrucianism (a theological doctrine built on esoteric truths of the ancient past, which, concealed from the average man, provide insight into nature, the physical universe and the spiritual realm) and judo. In 1949, he composed the Symphonie Monoton-Silence, which consists of twenty minutes of a single extended sound produced by an orchestra and a chorus, followed by twenty minutes of silence. After intensive training in Japan, upon his return to France in 1952 he published a book on judo and opened his own school.

Over the years, Klein had dabbled in painting, but only in 1955 did he begin to think seriously about becoming an artist. Refusing to play by the rules, he denounced both the academy and the avant-garde, proclaiming himself a revolutionary genius. In this regard, he was right. His career progressed with miraculous speed. By 1958, he had had solo shows in Milan, London, Düsseldorf and Paris, and was commissioned to create a series of huge murals for a new theater in Gelsenkirchen, Germany. Over the next two years, he began to make a new kind of picture, the 'anthropométry,' by covering models with paint and having them press their bodies against paper or canvas. He exhibited an empty gallery as an artwork. He invented another kind of conceptual art based on the sale of “zones of immaterial pictorial sensibility.” While painting his German murals, he became close to the artists of Group Zero in Düsseldorf, and in 1960 he helped found the Nouveaux Réalistes group in Paris.

In 1961, the Museum Haus Lange, in Krefeld, organized a retrospective of his work, where he exhibited sculptures made from jets of fire. He then proceeded to make a series of canvases “painted” with a flame-thrower. In the same year, he had exhibitions in New York, Los Angeles, Rome, and Milan. In January 1962 he married the artist Rotraut Uecker; their happy union was cut tragically short in June, when Klein suddenly died of a heart attack at the age of thirty-four.

A true giant of the post-war avant-garde, Yves Klein left behind an impressive body of work that broke new ground and blended traditional artistic mediums with performance and spiritual exploration. Lévy Gorvy is honored to represent the Estate of Yves Klein in North America. Exhibitions of the artist at the gallery include Yves Klein: A Career Survey (2005) and Audible Presence: Lucio Fontana, Yves Klein, Cy Twombly (2013), which was accompanied by the first New York performance of Symphonie Monotone-Silence to a vast audience at the Madison Avenue Presbyterian Church in September 2013 to critical acclaim.

Over one thousand people were present to experience this moving and transcendent work, which unfolds as an orchestra of musicians and singers holds a single continuous tone for a twenty-minute period, followed by twenty minutes of absolute silence.

With thanks to Grace Cathedral and online partner Artsy. Video by Slow Clap Productions. 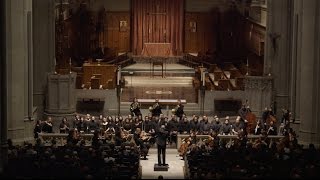 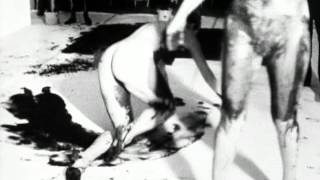 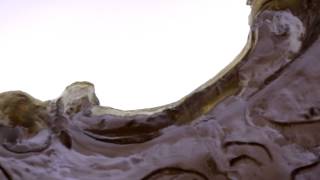 For the Martian Chronicles The Sky as a Studio. Yves Klein and his contemporaries

Museum of Old and New Art

The Moon: From Inner Worlds to Outer Space

Artsy | How Yves Klein Tricked the World with This Iconic Photograph

The man was avant-garde artist Yves Klein, and it was his own satirical publication featuring his now-famous image …

Fad | My week in the art world – Signals to Klein

Artsy | Yves Klein’s Legacy Is about Much More Than Blue

As the story goes, Yves Klein’s love affair with the color blue began when the artist was seduced by …

At age 20, Yves Klein conceived of an experimental composition with two friends in the South of France …

Departures Magazine | All About Yves

In her collection Bluets, the poet and art critic Maggie Nelson writes about visiting London and seeing …

LA Times | Moving sound to anywhere but the concert hall

NEW YORK — This has been the season of the concert hall. The one named after Walt Disney turned 10. …

Gallerist | The Year in, and Beyond, the Galleries

A beautiful show of often little-known works by three revered artists, all of whom exaggerated or abused …

The New York Times | Paola Pivi - ‘Ok, you are better than me, so what?’; ‘Audible Presence’

There are several ways to describe the frisson between the shows with which Galerie Perrotin, of Paris, …

For the inaugural exhibition at Dominique Lévy’s new gallery on Manhattan’s Upper East Side, the …

Connoisseur, collector, advisor, and gallerist Dominique Lévy is admired internationally as a leading …

There’s been a lot of noise about silence lately. Last month, art and music lovers poured into an Upper …

This seductive show, the gallery’s first, borrows its title from Klein’s description of his rarely …

A turquoise bear is ready to drop onto his colorful siblings from the ceiling of 909 Madison Avenue, …

It was the New York premiere of the “Monotone-Silence Symphony.” Conceived by the late French artist …

Cool Hunting | Link About It: This Week's Picks

Observer | ‘This Symphony Does Not Exist’: At Dominique Lévy’s Performance of Yves Klein’s ‘Monotone-Silence’

There are many ways to open a new gallery. On Tuesday night, the irrepressible Frenchman Emmanuel Perrotin …

The New York Times | The Storm Before the Calm: Strange Sounds Emerge From ‘Monotone-Silence Symphony’

Last evening at the Madison Avenue Presbyterian Church, an orchestra and a chorus performed Yves Klein’s …

The Daily Beast | A Silence Worth 1,000 Pictures

This untitled blue monochrome, painted by Yves Klein in 1956, is just a standin for another, unreproducible …

When she was just 13 years old, in the late 70s, Swiss born New York gallerist Dominique Levy was given …

Imagine 20 minutes of a blaring single note, emitted in unison by a symphony and a choir. Imagine it …

Does anyone remember the Rag & Bone outpost on Madison and East 73rd Street? I do, and fondly.

The New York Times | A Sound, Then Silence

The sound, a D major chord produced by an orchestra and a chorus, begins abruptly, full force, and fills …

The most anticipated gallery opening of New York’s young fall season is actually a two-for-one.