Terry Adkins (b. 1953, Washington, DC; d. 2014, Brooklyn, New York) established an interdisciplinary and frequently collaborative practice that encompassed sculpture, music, printmaking, and video. Engaging with the improvisatory spirit of free jazz, he sought to “find a way to make music as physical as sculpture might be and sculpture as ethereal as music is.”

Adkins grew up in a musical household. He played guitar, saxophone, and other instruments and counted John Coltrane, Nina Simone, and Jimi Hendrix among his influences. His early affinity for drawing was nourished at Fisk University in Nashville, where he studied with such luminaries as David Driskell and Martin Puryear. In 1975 Adkins completed his BS in printmaking and then pursued an MS in the field from Illinois State University. In 1979, he received an MFA in sculpture from the University of Kentucky. Adkins returned to DC, where he joined a free jazz band led by Yahya Abdul-Majid of the Sun Ra Arkestra.

It was Adkins’s residencies at the Studio Museum in Harlem and, subsequently, P.S. 1 Contemporary Art Center which prompted the artist’s experimentation with sculpture, installation and performative practice. In 1986, Adkins was awarded a residency in Zürich, where he founded the Lone Wolf Recital Corps, a performance collaborative featuring a rotating ensemble of artists, musicians, and friends, such as Charles Gaines, Kamau Patton, Jacolby Satterwhite, and Jamaaladeen Tacuma. He termed the group’s multimedia happenings “recitals.”

Adkins’s recitals were often dedicated to recovering the narratives of historical figures important to the cultures of the African diaspora, including botanist and inventor George Washington Carver, musician Jimi Hendrix, intellectual W. E. B. Du Bois, composer Ludwig van Beethoven, and blues singer Bessie Smith. Adkins reached beyond conventional interpretations of the past in his “abstract portraiture,” coming to understand his subjects through site-specific research, engaging relevant contemporary communities, and employing historically potent materials for his installations and recitals.

In 1995, Thelma Golden curated an exhibition of Adkins’s work at the Whitney Museum of American Art at Phillip Morris, including his Akrhaphones: giant horns which are both sculptures and invented instruments. In 1999, Adkins mounted a solo exhibition at the Institute of Contemporary Art in Philadelphia and in 2000 he joined the faculty at the University of Pennsylvania School of Design in the departments of Fine Arts and Africana Studies. In 2009, he received the Jesse Howard, Jr. / Jacob H. Lazarus—Metropolitan Museum of Art Rome Prize. A retrospective of his work, Terry Adkins Recital, was organized in 2012 by the Frances Young Tang Teaching Museum and Art Gallery at Skidmore College, Saratoga Springs, New York.

On February 8, 2014, Adkins passed away at the age of 59. His work has posthumously been included in significant international exhibitions including the 2014 Whitney Biennial, the 56th Venice Biennale in 2015, and the 2015–16 traveling exhibition The Freedom Principle: Experiments in Art and Music, 1965 to Now. In 2017, the Museum of Modern Art in New York hosted the first exhibition and performance series to reunite the Lone Wolf Recital Corps since Adkins's death. Important solo exhibitions of his work include Terry Adkins: Infinity Is Always Less Than One at the Institute of Contemporary Art, Miami (2018); Our Sons and Daughter Ever on The Altar co-presented by Frist Museum and Fisk University, Nashville (2020); and Resounding at the Pulitzer Art Foundation, St. Louis (2020).

In 2018, Lévy Gorvy held its first monographic exhibition with Adkins's estate: Terry Adkins: The Smooth, The Cut, and The Assembled, curated by the artist’s friend and collaborator Charles Gaines. The accompanying catalogue includes essays by Gaines and art historian Michael Brenson and features poems written by Robin Coste Lewis.

Coinciding with Lévy Gorvy's solo presentation of Terry Adkins at FOG Design+Art 2020, artist Charles Gaines sat down with us to discuss the multidisciplinary artist's comparison to jazz and its sense of improvisation, repetition, and collaboration. 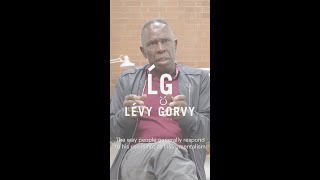 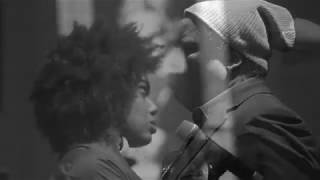 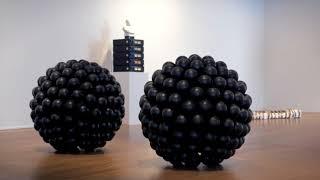 Terry Adkins: The Smooth, The Cut, and The Assembled 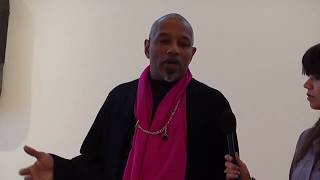 Terry Adkins on Off Minor at The Block Museum of Art 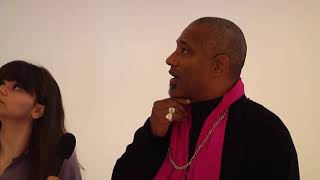 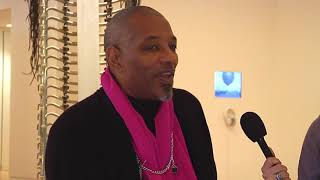 Terry Adkins on Art & Music, Potential Disclosure, and Historical Figures at the Block Museum of Art

Terry Adkins: The Smooth, The Cut, and The Assembled

Terry Adkins: Our Sons and Daughters Ever on the Altar

Terry Adkins: Our Sons and Daughters Ever on the Altar

Terry Adkins: Infinity Is Always Less Than One

The Chattanoogan | Terry Adkins: Mute Is Now At Institute Of Contemporary Art

Mr. Adkins conceived Mute in the form of a triptych, a type of three-part artwork often religiously associated.

“Grief and Grievance: Art and Mourning in America,” at the New Museum in New York, is about mourning, …

The exhibition foregrounds the Terry Adkins's lifelong engagement with music, language, history, and …

The Atlantic | The Artifacts of Bygone Lives

Adkins' images are featured in a forthcoming exhibition at New York’s New Museum, titled “Grief and …

Terry Adkins: Resounding at the Pulitzer Arts Foundation will trace the artist’s development over his …

Artforum | Terry Adkins: Our Sons and Daughters Ever on the Altar

In the Gordon Contemporary Artists Project Gallery, the Frist presents ‘Terry Adkins: Our Sons and …

The American sculptor, composer and performance artist passed away in 2014, and has since been growing …

The work of Terry Adkins, who died in 2014, is nothing less than visually embodied philosophy.

As part of the ICA's inaugural spring programming, the young museum is mounting the first posthumous …

The New York Times | She Married an Artist, and Now Finds Comfort in His Work

Today, Ms. Williams-Adkins is committed to preserving her husband’s legacy and last year brought his …

Following Lévy Gorvy’s recent announcement of its representation of the Estate of Terry Adkins, the …

Art Observed | NEW YORK — TERRY ADKINS: “THE SMOOTH, THE CUT, AND THE ASSEMBLED” AT LÉVY GORVY THROUGH FEBRUARY 17TH, 2018

Terry Adkins, who unexpectedly died in 2014, left behind a multidisciplinary body of work that is hard …

Terry Adkins: The Smooth, The Cut, and The Assembled highlights the physical force through which Adkins …

The show at Lévy Gorvy, which now represents the artist’s estate, is called “Terry Adkins: The Smooth, …

The show is timely. Adkins’ reputation has soared of late: his work was featured in the 2014 Whitney …

Blouin Artinfo | Terry Adkins: “The Smooth, The Cut, and The Assembled” at Lévy Gorvy, New York

Terry Adkins’ “The Smooth, The Cut, and The Assembled” is his first solo exhibition at the gallery. It …

Blouin ArtInfo hand-picks a list of must-visit shows, including Terry Adkins at Lévy Gorvy. The show …

When Terry Adkins (1953-2014) died suddenly three years ago, this catalog was in development. Understandably …

At the fair, Lévy Gorvy has a 2013 sculpture that illustrates Adkins’s complexity. Sitting on a low …

Artnet | Lévy Gorvy to Represent the Estate of Terry Adkins