Alexander Calder was born in 1898 to artist parents—his father was a sculptor and his mother was a painter. While living in Pasadena in 1906 amidst the flourishing Arts and Crafts Movement, Calder was given his first tools and a workshop where he made toys and jewelry for his sister’s dolls. In his twenties, Calder moved to New York and studied at the Art Students League where he produced paintings congruous with the Ashcan aesthetic. He worked concurrently at the National Police Gazette, illustrating sporting events and the Ringling Bros. and Barnum & Bailey Circus. During this period, he commonly used sheet metal and wire for sculptures and other projects.

Soon after moving to Paris in 1926, Calder created Cirque Calder (1926–31). Made of wire and a spectrum of found materials, Cirque was a work of performance art that gained Calder an introduction to the Parisian avant-garde. Calder continued to explore his invention of wire sculpture, whereby he “drew” with wire in three dimensions portraits of friends, animals, circus themes, and personalities of the day. Calder called these figurative wire works “objects” as opposed to “sculpture” to signify his decisive break from the solidity of clay, bronze, and marble.

In the fall of 1931, a radical shift in Calder’s artistic career occurred when he created kinetic abstract sculpture and gave form to an entirely new type of art. The earliest of these objects moved by systems of motors, and were dubbed “mobiles” by Marcel Duchamp—in French, “mobile” ingeniously refers to both “motion” and “motive.” Calder soon turned away from the motorized compositions of his earliest mobiles, developing works that respond to air currents, light, humidity, and human interaction. He also created stationary abstract works that Jean Arp dubbed “stabiles.”

In 1937, Calder completed Devil Fish, his first stabile enlarged from a model. He received two important commissions: Mercury Fountain for the Spanish pavilion at the 1937 Paris World’s Fair, and Lobster Trap and Fish Tail for the main stairwell of the new Museum of Modern Art building in New York in 1939. His earliest retrospective was held at the George Walter Vincent Smith Gallery in Springfield, Massachusetts, in 1938. Another retrospective followed in 1943 at the Museum of Modern Art in New York, curated by James Johnson Sweeney and Duchamp. At that time, Calder was the youngest artist ever to whom the museum had dedicated a full-career survey, which was so popular that it was extended into 1944.

In the decades following World War II, Calder gained international distinction. In 1946, he had a major show at Galerie Louis Carré in Paris for which Jean-Paul Sartre wrote a seminal essay. He made the first of three extended trips to Brazil in 1948, where he held highly successful exhibitions in Rio de Janeiro and São Paulo. In 1952, he accepted the commission for Acoustic Ceiling (1954) for the Aula Magna auditorium at the Universidad Central de Venezuela. That same year, Calder represented the United States at the Venice Biennale, winning the Grand Prize for sculpture.

During a yearlong stay in Aix-en-Provence in 1953, Calder executed the first group of large-scale outdoor works and concentrated on painting gouaches. In 1954 and 1955, he visited the Middle East, India, and South America, with trips to Paris in between, resulting in an astonishing output and range of work. Calder soon turned his attention to commissions both at home and abroad, producing such recognizable works as .125 (1957), a mobile hung in John F. Kennedy Airport in New York, and Spirale (1958), a major commission for UNESCO in Paris. In Italy, Calder created Teodelapio, a stabile over fifty-eight feet tall, for the 1962 Spoleto Festival.

In 1963, Calder completed the construction of a large studio overlooking the Indre Valley in Saché, France. With the assistance of a full-scale, industrial ironworks, he began to fabricate monumental works and devoted much of his later working years to public commissions. Some of his most important projects include Trois disques for the 1967 exposition in Montreal; El Sol Rojo for the 1968 Mexico City Olympic Games; and La Grande vitesse for Grand Rapids, Michigan, in 1969. Major retrospectives of Calder's work were held at the Guggenheim Museum in New York (1964); The Museum of Fine Arts, Houston (1964); Musée National d'Art Moderne, Paris (1965); Fondation Maeght in Saint-Paul-de-Vence, France (1969); and the Whitney Museum of American Art, New York (1976). Calder died in New York in 1976 at the age of seventy-eight. 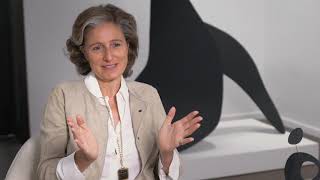 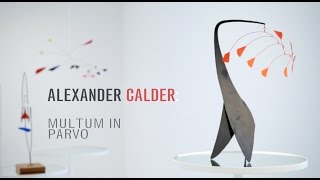 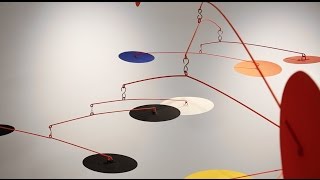 Tanguy Calder: Between Surrealism and Abstraction

They were separated by 25 years: a generation apart, Alexander Calder and Ellsworth Kelly sparked a rich …

How is art shaped by friendship? The exhibition “Calder / Kelly,” which is now open at the Lévy …

Calder/Kelly: This exhibition celebrates the decades-long friendship between the American artists, both …

If you require further proof of the greatness of Alexander Calder, this exceptional show should do the …

Just one work here: the two-by-four-metre mobile “Blue and Yellow Among Reds” hovers above the viewer …

Interior Design | a matter of perspective

In 1948, on the occasion of his wife’s 43rd birthday, Alexander Calder presented Louisa with a cigar …

Dominique Lévy has opened a jewel of a show of Alexander Calder in her Madison Avenue gallery. But careful …

FT HOW TO SPEND IT | Calder and Calatrava at Dominique Lévy

We think of Calder tinkering, not using molds; but creation by touch tapped a splendid earthiness in …

The American sculptor Alexander Calder (1898-1976) was blessed with several kinds of genius.

Wall Street Journal | In the Realms of Flight and Fantasy

In recent years we’ve seen a resurgence of shows in which artists are paired. MoMA’s “Matisse Picasso” …

Titled “Tanguy Calder: Between Surrealism and Abstraction” this fascinating and unexpected exhibition …

In New York, art is nothing if not convenient. Some single streets feature more art galleries than whole …

Goings on About Town