Born in Newcastle in 1936, Gerald Laing emerged on the British Pop Art scene in 1962, two years into his arts education at Saint Martin’s School of Art, London. In 1963, his painting Brigitte Bardot (1963) was included in Young Contemporaries 63, an exhibition at the Royal Society of British Artists’ Galleries in London. Shortly afterwards, he visited the United States, where he met Andy Warhol, James Rosenquist, and Roy Lichtenstein, and spent a summer working for Robert Indiana. He moved to New York in 1964, having received an offer for representation from Richard Feigen Gallery, and aligned himself with the American Pop Art movement. In 1965, he dramatically shifted his practice towards sculpture, devoting the next forty years to the discipline. Later in life, Laing returned to painting—and the half-tone dot—to reflect upon the Iraq War and the consistent amplification of celebrity culture. Since Laing’s passing in 2011, his works have been included in nearly every major survey of British Pop Art, including This was Tomorrow: Pop Art in Great Britain (Kunstmuseum Wolfsburg, Germany, 2016–17); When Britain Went Pop: British Pop Art, The Early Years (Christie’s London, 2013); Art and the 60s: This Was Tomorrow (Tate Britain, London, 2004); and Pop Art: U.S/U.K Connections, 1956–1966 (Menil Collection, Houston, 2001). Significant solo exhibitions have been held at the Fruitmarket Gallery and Scottish National Gallery of Modern Art, both in Edinburgh. His works can be found in the collections of the Tate Modern, London; the Museum of Modern Art, New York; the Denver Art Museum; and the Whitney Museum of American Art, New York, among others. 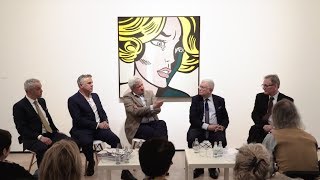 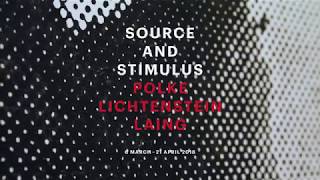 New York Times | A Fair With a French Accent, Inside and Out

Born in Newcastle in 1936, Gerald Laing emerged on the British Pop Art scene in 1962, two years into …

Source and Stimulus: Polke, Lichtenstein, Laing at Lévy Gorvy London is the first show to consider the …

The Sunday Telegraph | Out of Hiding

'Source and Stimulus: Polke, Lichtenstein, Laing' at Lévy Gorvy. The Ben-Day dot is the subject of this …

Lévy Gorvy will host an exhibition titled “Source and Stimulus: Polke, Lichtenstein, Laing” at its …

Featuring exceptional works by the legendary trio of artists, this is the first exhibition to connect …