Born in Newark, New Jersey in 1938, Pat Steir studied art and philosophy at Boston University and received her BFA from the Pratt Institute in 1962. In 1963, she was invited to participate in her first group show at the High Museum in Atlanta. The next year, her work appeared in group exhibitions at the Philadelphia Museum of Art and the Museum of Modern Art, New York, making her a key figure among the first wave of women artists to gain prominence in the New York art world.

In the mid-1960s, Steir was appointed an Art Director at Harper & Row publishers in New York. In the early 1970s she taught art at Parsons School of Design, Princeton University, and later at the California Institute of the Arts, where Ross Bleckner, David Salle, and Amy Sillman were among her students. She is a founding board member of Printed Matter, HERESIES: A Feminist Publication on Art and Politics, and Semiotext(e).

Steir was lauded in the early 1970s for her canvases featuring various iconographic symbols—most prominently roses crossed out with ‘X’ figures, inspired by Shakespeare’s famous aphorism, “A rose by any other name would smell as sweet” and Gertrude Stein’s retort, “A rose is a rose is a rose.” Of this act of effacement, the artist explains, “I wanted to destroy images as symbols. To make the image a symbol for a symbol. I had to act it out―make the image and cross it out.” This series marks Steir’s first engagement with questions of representation and semantic signification, issues she continues to explore. She was compelled to search for her own praxis that was both painterly and theoretical. The influence of Conceptual art, French philosophy, and East Asian art and thought moved her to begin creating room-size installations in the mid-1970s.

In the late 1970s, Steir traveled extensively in the United States and Europe, where numerous galleries regularly presented her work. By the late 1980s, back in New York, Steir began to experiment with pouring and flinging layers of thinned paint onto canvas, releasing herself from conscious consideration of imagery and composition and allowing the indexical trace of her process to become the image itself. While her pouring process invites comparisons to Jackson Pollock, rather than laying her canvases on the floor, Steir paints from a ladder and works directly on unstretched canvas tacked to the studio wall. The delimited chance of this working method has since come to define Steir’s practice. Her painting methods incorporate delimited chance, with a studied and deliberate release of control developed through her study of Japanese and Chinese painting. Deeply inspired by Taoism and Buddhism, her working methods transcend the divide between figuration and abstraction. Intentionally deviating from the gestural flatness of the Abstract Expressionists, Steir instead explores a contemplative condition of unbound perception. In this way, she seeks to both portray and evoke a state of mind: rather than representing the sublimity of a waterfall or seascape, Steir’s paintings become charged spaces of transcendental content.

For five decades, Steir has exhibited widely in American and European museums. She recently completed two major suites of monumental, rigorous Waterfall projects: Silent Secret Waterfalls for the Barnes Foundation in Philadelphia (2019) and Color Wheel for the Hirshhorn Museum and Sculpture Garden, Smithsonian Institution, Washington, DC (2019–2021). Lévy Gorvy has shown her paintings with solo exhibitions in London (2016) and New York (2017), and in 2019 hosted Visible Traces (Mountain Air Water), an exhibition curated by Steir.

In 1988, Pat Steir Prints 1976–1988 opened at the Cabinet des Estampes, Musée d’Art et d’Histoire, Geneva, and traveled to the Tate, London. The prior year, the Rijksmuseum, Amsterdam presented Paintings 1981–1984; the Baltimore Museum of Art hosted Drawing Now: Pat Steir; and Kunstmuseum Bern opened Paintings and Drawings. In 1984, the Brooklyn Museum organized Pat Steir: The Brueghel Series (A Vanitas of Style), an exhibition that traveled to ten museums including the Dallas Museum of Art; Centre d’Art Contemporain, Palais Wilson, Geneva; Los Angeles County Museum of Art; Des Moines Art Center; and the Gemeentemuseum Den Haag, the Netherlands, among other venues. Form Illusion Myth: The Prints and Drawings of Pat Steir opened at the Spencer Museum of Art, University of Kansas, Lawrence, in 1983 and traveled to the California State University, Long Beach; Contemporary Arts Museum, Houston; The Wellesley College Museum; and the Brooks Memorial Art Gallery, Memphis.

Steir is the recipient of numerous awards, including a Guggenheim Fellowship (1982), as well as grants from the National Endowment for the Arts (1976, 1973). In 1991, she was awarded an Honorary Doctorate of Fine Arts from the Pratt Institute, New York, and in 2001, she received the Boston University School for the Arts Distinguished Alumni Award. Steir received the Visionary Woman Award from the Moore College of Art & Design in 2015 and in 2016 was elected a member of the American Academy of Arts in Letters. In 2017, she was awarded the International Medal of Art by the United States Department of State. 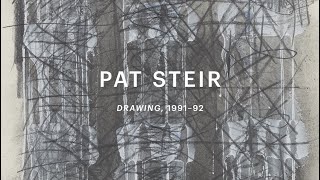 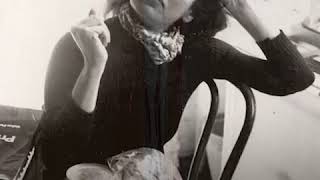 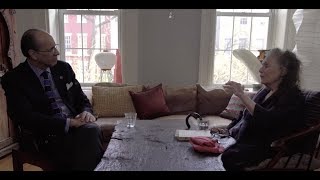 Pat Steir 'For Hong Kong' Series, in Conversation with Mike Hearn of the Metropolitan Museum of Art 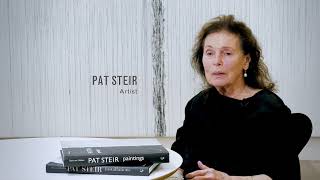 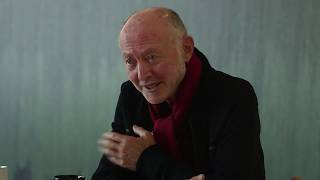 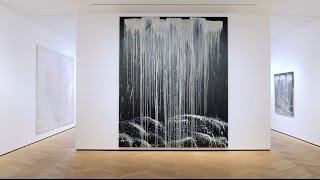 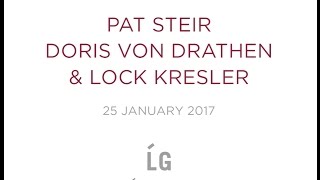 Ear to the Ground: Earth and Element in Contemporary Art In reviewing Francesco Clemente last time, I mentioned a companion show of works on paper by Pat Steir.

Pat Steir is one of the most important contemporary American abstract artists. She was born in Newark, …

The artist speaks of living in 1970s Amsterdam, where she visited a Rembrandt painting at the city's …

Rembrandt van Rijn painted and etched his own image dozens of times over the course of his life, but …

Vogue | In a New Documentary, Pat Steir Speaks for Herself

Over the course of the documentary, which releases on Tuesday for rental on streaming services, the 82-year-old …

Improvised Life | Pat Steir: How To Occupy This Time On Earth

For the past year and a half, a beautifully illustrated German book has been sitting like a totem on …

The Washington Post | At the Hirshhorn, Pat Steir’s ‘waterfall’ paintings move you — literally

As one of the few women who became famous in the New York art world in the 1970s, Steele's paintings …

The Manhattan home where she has lived for close to three decades is brimming with works by Sol LeWitt, …

An influential American painter, Pat Steir is known for her eclectic practice influenced by Color Field …

Since the late 1980s, Pat Steir has slung her paint from a loaded brush, letting oils arc and flow in …

The Washingtonian | Things to Do in DC This Weekend (October 24-27): World Series Home Games, Modern Love, and Spooky Museum Events

Document Journal | 500 years, 400 artists, and 54 countries: ‘Great Women Artists’ is the most extensive collection of female created art yet

Last Thursday, art enthusiasts gathered at The Metropolitan Museum of Art for “An Evening with Great …

Ask the painter Pat Steir what she’d like viewers to take away from her work, and she doesn’t immediately …

It’s almost remarkable how regularly it happens. You’re speaking to an established person in the …

"All of my work is a search and an experiment,” Pat Steir once said. Born in 1940 and exhibiting since …

For her largest site-specific exhibition to date, Pat Steir will hang 28 large-scale paintings, each …

The artist unveiled a major site-specific commission in Philadelphia, and a second will be installed …

The New Yorker | The Exhibit That Painted Itself

“Silent Secret Waterfalls: The Barnes Series” is a continuation of the waterfall series that Steir …

Pat Steir is the first artist to make work for the Barnes Foundation since Matisse – and, as she tells …

Acclaimed (then overlooked) during five decades, the painter hits a new tempo in life and art with a …

The first artist commissioned to make work for the Barnes Foundation since Matisse, Pat Steir has created …

The commissions are the latest coup for the 78-year old artist, whose career is on a hot streak.

Artnews | Pour Forth: Pat Steir on Her Latest Paintings

And as almost everyone sees it these days, her career is soaring... Her work looks fresh—joyous and …

ArtNet | After Decades of Slow and Steady, Pat Steir’s Market Is Now Moving at a Breakneck Pace

Over the course of her 77 years, Pat Steir has veered between conceptual art, Minimalism, and figuration …

The New Yorker | Goings On About Town: Pat Steir

For her first show at Lévy Gorvy, Pat Steir debuts more than a dozen new works, including five 11-foot-tall …

The exhibition title, which comes from a poem by Anne Waldman written specifically for the show, translates …

Cultured Magazine | Against the Grain

Artist Pat Steir compares beautiful artwork to an antidote to our cruel times. “There are two kinds …

Pat Steir: Kairos | The conceptual painter, known for the effervescent colors and forms in her “Waterfall” …

The conceptual painter, known for the effervescent colors and forms in her "Waterfall" series, returns …

The New York Times | ‘What Next?’ an Uncertain Art World Asks, Sticking to Proven Brands

The art market is almost as old as art itself. But it’s only in the last decade or so, with increased …

Next up: a talk this afternoon by painter and national treasure Pat Steir, Russian-born philanthropist …

Accompanied by the music of her son Ambrose Bye, and illuminated by images of Pat Steir’s brightly …

Even Brett Gorvy, who just left Christie’s after 23 years to join forces with the dealer Dominique …

It’s hard to fully comprehend the paintings of Pat Steir until you’ve stood in front of one.

Pat Steir is a full-time painter, but in another life, she was likely an acclaimed poet.

Dominique Lévy is pleased to announce the gallery’s representation of artist Pat Steir, who first …

In the midst of an auction week marked by huge sales for work by Cy Twombly and Agnes Martin in New York, …